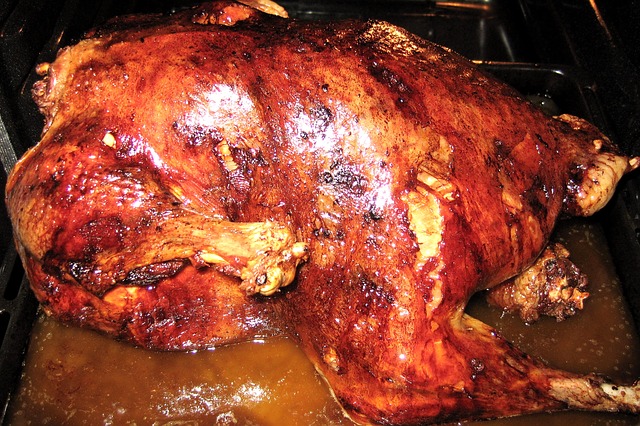 Right breast of Thanksgiving Turkey explodes in the oven at the Thurman’s residence on Westview Drive. No injuries were reported; anxiety levels were high.

I grew up in a larger family in Fort Valley, Georgia. Fort Valley is a beautiful town situated in the heart of Georgia, on many maps is it between the o and the r. Fort Valley is the home of  Blue Bird Bus company,  Lane’s Southern Orchards, and Georgia Bob’s BBQ.

Around this time last year I was watching Jimmy Fallon when he was doing his segment on #thanksgivingfail, and I remember one Thanksgiving fail, my mom, who is an exceptional cook, was trying a new way of cooking her turkey.

We had some family coming over, and momma was cooking a big bird.  Things in the kitchen were busier than a one-eyed cat trying to watch two mouse holes at the same time. When all of a sudden there was the muffled sound of an explosion in the oven followed by a small combination of steam and smoke as the right breast of this rather large breasted bird exploded. Momma quickly opened the oven to see what had happened, what she found was a crumpled sheet of aluminum with pieces of meat and skin shrapnel from the explosion. I remember her initial exasperation which was immediately followed by her saying, “It is still moist and almost done, it will have to do.”

Dad carved the bird, and no one but our family knew about the damaged turkey.

For most of us, the Thanksgiving fails, while at the moment have things that seemed negative turned out to be a great memory maker.

One of the ways to expand you Attitude of Gratitude is to share some stories of Thanksgiving’s past.

Have a Thanksgiving filled with gratitude and grace? #Attitude of Gratitude, #Get a Grip on Stress.  #ATTITUDEOFGRATITUDE, #GETAGRIPONFEAR#GETAGRIPONSTRESS, #LOWSERHOLIDAYSTRESS
Previous: Push Back Stress with Gratitude!
Next: Christmas Stress Busting Tips Pt 1