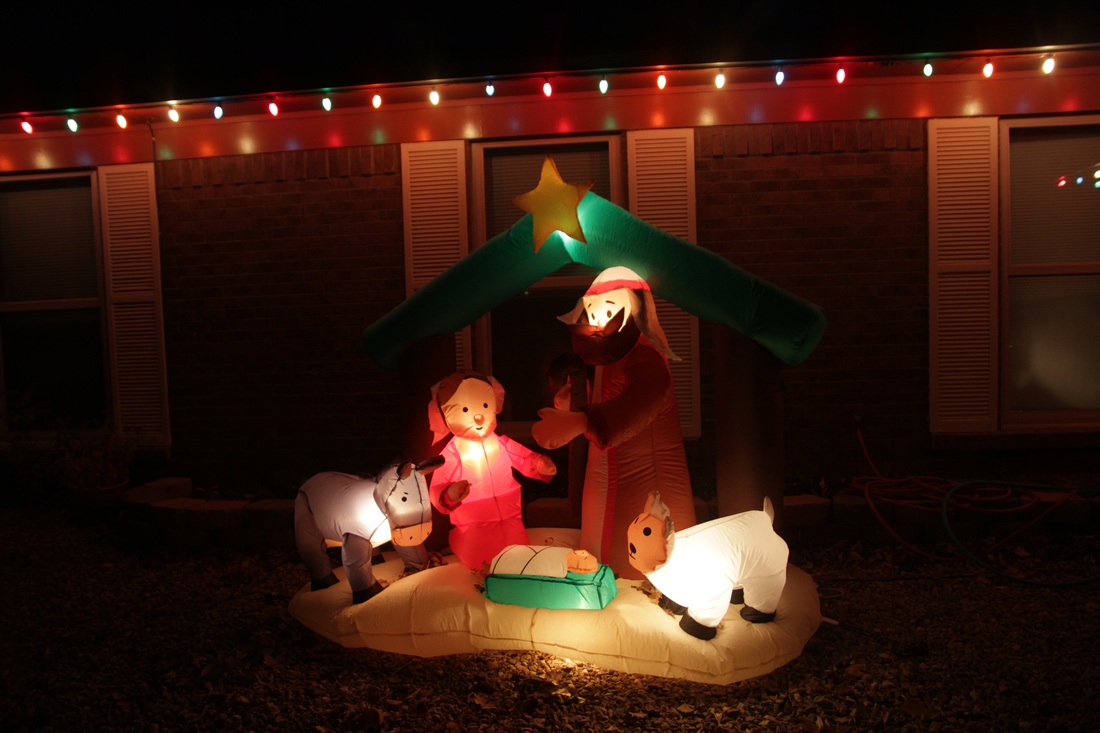 I found baby Jesus at Walmart by John Thurman

Christmas yard art is at an all time low. I see blow up Santa’s, Reindeer, that look more like mule deer, gift boxes, snow globes, and all matter of Christmas merchandise in people’s yards.  Last year, one of my childhood friends from my hometown of Fort Valley, Georgia sent me a photo of a what he called a redneck Christmas Deer, it was strung up on its hind legs and had red Christmas bulbs cascading out of its abdominal area. I guess that was a field dressed reindeer otherwise known as lunch.

Getting back to my story, in our neighborhood there were only two manger scenes, now there are three.  I hate to admit it, but when I began noticing all of the inflatables, I felt like it was trashy, vampy looking. The other night I was out for a walk enjoying the silent, crisp air of the early evening in New Mexico only to have it interrupted by the low, endless drone of 8 blow up device fans filling the atmosphere with their mechanical hum the corner of one yard. A bit overboard, but we do live in the United States of America, and they are free to exercise free speech.

That is when I decided to step onto the slippery slope of conformity and seek out an inflatable Baby Jesus and the Holy Family. After all, the grandsons will love it the colors and maybe it will remind a few people of the Reason for the Season as they drive by my corner.

It was a daunting task. I went to Lowe’s, Target, Home Depot, Kmart, and Sears in search of the baby Jesus. I was determined to use my inflatable as the reminder of the reason for the season. Moreover, find him I did. The Walmart helper points to shelves that bursting with blow up igloos, the Grinch, Snoopy, a Minion, and a least four types of Santa’s, including one in camo, and one of Santa Riding a Polar Bear! There were blow up snow globes, Disney characters, snowmen and finally, like the three wise men in search of the baby, I found him on the bottom shelf, pushed to the rear of the rack in the Garden Department at Walmart.

I guess baby Jesus is not in demand much anymore. You see, when stores are placing merchandise on their shelves, they put the best sellers and impulse items on the center shelf.

A couple of years ago, Angie and I had the opportunity to see the traditional birthplace of Jesus. It was a beautiful experience, a spiritual experience. I hope that if you have the chance to visit the Holy Land, you will take the time and put up with the hassle to visit this site. Even though it is a very touristy place, almost everyone believes this is the spot.

Baby Jesus started life on the bottom shelf in a barn/cave. The Baby Jesus became the Way of Salvation for all who believe on him.

Way too many Americans have what I call the Ricky Bobby view of Baby Jesus. They love the baby Jesus but Jesus grew up and became a man. Christmas means nothing without Easter.

In the early days of the church, the early church leaders sought to find a way to teach basic Christology, (the study of who Christ). People, for the most part, could not read, there were no printing presses, so the way primary teaching went to the masses was through the story.
​
The first Creed of the Church is the Apostle’s Creed; many believe this was the first unifying statement of the church, before the writing of the New Testament. Some traditions say that the Apostle’s Creed came from the original band of Christ followers.
As we move into this Advent Season let me encourage you to read it slowly:

I believe in God, the Father almighty,
creator of heaven and earth.
I believe in Jesus Christ, his only Son, our Lord,
who was conceived by the Holy Spirit
born of the Virgin Mary.
He suffered under Pontius Pilate,
was crucified, died, and was buried;
he descended to hell.
The third day he rose again from the dead.
He ascended to heaven
and is seated at the right hand of God the Father Almighty.
From there he will come to judge the living and the dead.
I believe in the Holy Spirit,
the holy catholic* church,
the communion of saints,
the forgiveness of sins,
the resurrection of the body,
And the life everlasting. Amen.

*that is, the real universal, Christian church of all times and all places

May you have a blessed Advent Season!

And one final question – How do you treat the Baby Jesus, is he on the bottom rack or are you learning to let him be Lord?

Previous: Push Back the Tyranny of Fear with a Dose of Gratitude
Next: Fear Not – For Unto Us a Child is Born #1